To share your memory on the wall of Sharon Scully, sign in using one of the following options:

Sharon’s good works extended beyond her work place. For many years she did fund raising for the Leukemia and Lymphoma Society. She volunteered at the VA hospital, working with Veterans, including doing Hospice work. At the age of 55 Ms. Scully was diagnosed with early onset Alzheimer’s Disease. She fought the disease and worked to find ways to help bring about a cure. She was the first person with the disease to testify before the State Legislature and went to Washington DC to testify.

Sharon was predeceased by her parents Harry and Helen Scully. She is survived by her daughter, Brianna Meredith, her son, Dylan Meredith, their father Bill Meredith, Sharon’s ex-husband and friend, and stepson Scott Smith. Her brothers and sisters-in-laws, Harry Scully, Brian and Barbara Scully, David and Bonnie Scully, and Fenix Scully, several nieces and nephews, and many dear friends, also survive her. She was predeceased by her husbands, Anastosios “Ernie” Poulias, and Raymond “Ray” Smith.

There will be an outdoor Memorial Service to celebrate the life of Sharon Scully on the grounds of the Unitarian Universalist Church in Meriden at 328 Paddock Avenue, Meriden. The service will take place on Saturday, November 7 at 1PM. Covid precautions will be followed. Masks will be required. People are asked to bring their own chairs and place them at least 6 feet away from anyone not in their household. Because of Covid there will not be a reception afterwards but people are free to walk the grounds observing social distancing.

Donations can be made in memory of Sharon Scully to the Alzheimer’s Association, The Leukemia and Lymphoma Society, or St. Jude Children's Research Hospital. Online condolences may be made at www.SheehanHilbornBreen.com
Read Less

Receive notifications about information and event scheduling for Sharon

We encourage you to share your most beloved memories of Sharon here, so that the family and other loved ones can always see it. You can upload cherished photographs, or share your favorite stories, and can even comment on those shared by others.

Posted Nov 17, 2020 at 07:27pm
My condolences to the entire family. I knew Sharon at the AG's office, although I was never in the same department that she was. Back in the day when we worked in the office and ate in the cafeteria, I remember seeing regularly. She was a very friendly person. All my best to you. 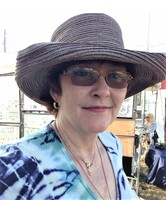