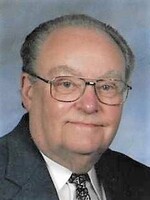 John Clifford Bloomquist, 96, beloved husband of Myrtle (Hedin) Bloomquist, died peacefully February 22, 2021 at Jefferson House after a short illness. He was born on October 4, 1924 in Hartford to John and Borghild (Karlsson) Bloomquist, attended Hartford schools and graduated from Canton High School in 1942. He proudly served in the U.S. Navy 1942 – 1946, principally in the Aleutian Islands and Pacific Theater. Following discharge, he attended Hillyer College and Boston University, graduating with a journalism degree in 1951.

Cliff was the consummate newspaperman, employed at The Hartford Times for 26 years as reporter, suburban and photo editor and assistant city editor. Following the Times’ demise he was city editor at The New Britain Herald until his retirement in 1989.

A passionate sports fan, especially of the Detroit Tigers and Detroit Red Wings, Cliff maintained meticulous statistical records and memorabilia of all major sports. As a hockey fan and newsman, he attended all New England Whaler home games, reporting for both the Times and Herald.

His family was always a source of pride and he thoroughly enjoyed supporting his grandchildren through their musical, theatrical and sports activities. He and Myrtle lived in West Hartford and enjoyed travelling throughout the U.S., Europe and China. He loved old movies, flea markets, word games and watching all sports. He was a lifelong member of Emanuel Lutheran Church of Hartford and The West Hartford Squires.

Besides his devoted wife of 69 years, he leaves two sons and daughters-in-law, Gary and Natalie Bloomquist of West Hartford and Craig and Kathleen Bloomquist of Newington, four grandchildren, Linnea Bloomquist, Hannah (Mark) Kominske, Erik Bloomquist and Carson Bloomquist, a great granddaughter, Evelyn, and several cousins in the Midwest and Sweden.

A private graveside service will be held at Fairview Cemetery, West Hartford, with a Celebration of Life to be held at a later date. In lieu of flowers, memorial gifts may be made to Emanuel Lutheran Church, 311 Capitol Ave, Hartford, CT 06106. Sheehan-Hilborn-Breen Funeral Home, West Hartford has care of arrangements.