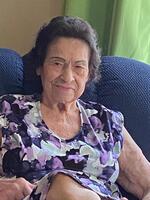 Edmay (Michaud) Tardif, beloved wife of the late Gerard Tardif, passed away on Tuesday, February 2, 2021. Edmay was born on May 27, 1927 in St. Leonard, New Brunswick, Canada, daughter of the late Alfred Michaud and Anna (Jean) Michaud.

At thirteen, Edmay left her home to work at the Sainte-Basile Convent in Madawaska, with the plan to become a nun. Life had other plans for Edmay. Edmay began a lifelong career of compassion and caring for others by working at the tuberculosis sanatorium of St. Joseph. She met Gerard on a blind date while working as an operator at Saint-Basile. She moved to Hartford, Connecticut where she worked at Greenwood Convalescent home and started a beautiful family with Gerard.

She is survived by Robert “Jim” Tardif and his wife Charlene, Richard Tardif and his wife Andrea, Kathy Tardif Brandon, and Glen Tardif. Edmay was well loved by friends and family, including her eight grandchildren and three great-grandchildren who fondly called her “Memere”. Edmay passed peacefully and joined her seventeen brothers and sisters, her son Gene Tardif, and her son-in-law Dean Brandon in heaven.

The Funeral Mass and burial are private. Online condolences may be made at www.SheehanHilbornBreen.com